The latest DJI Mavic Mini drone has leaked! As we gear up for the October 30th launch, more information is hitting every day. All the Info, Specs and leaked photos we have to date on the Mini Mavic below:

DJI will be selling the Mavic Mini through its online store. Historically orders from DJI direct have been received before being able to buy the drones off of local retailers shelves, or on amazon, etc. There is no telling if initial quantities will sell-out quickly.

A huge national retailer leaked the feature-set of the mavic mini. There are quite a few surprises:

OsitaLV got sent some photos of the Mavic Mini in the wild. Check out this 249gram drone in it’s standard color. 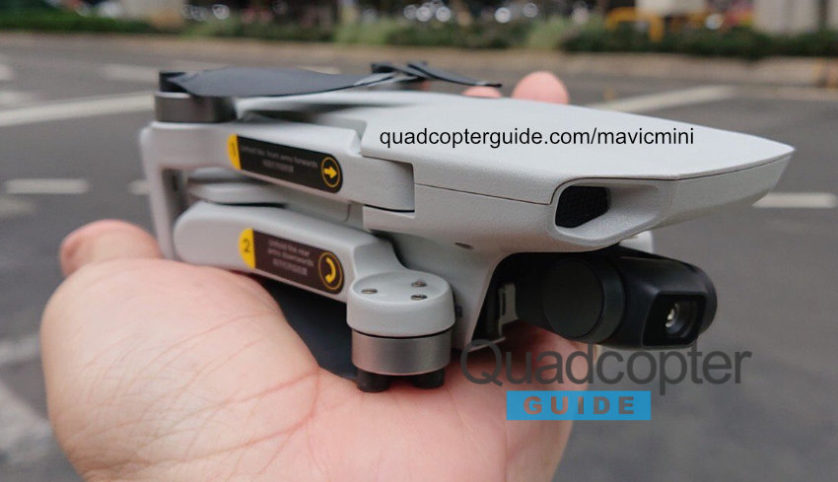 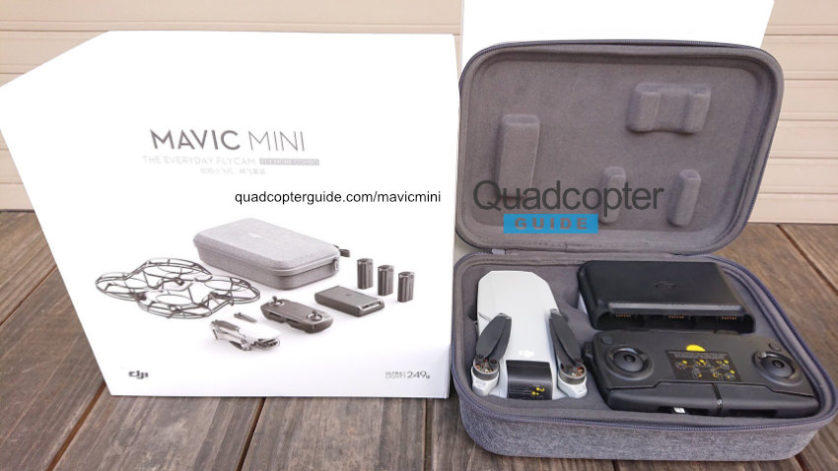 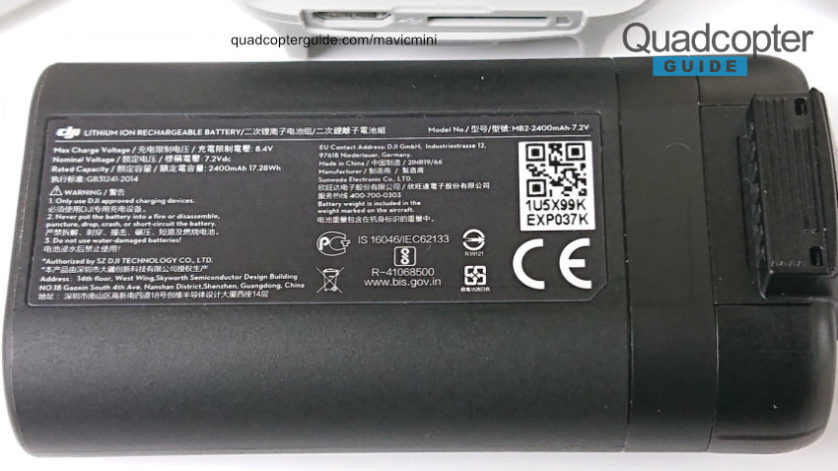 Update 9: Official Specs and features. Any other features/spec sheets to date are fake or guessed

When it rains it pours. Soon we will know everything there is to know about the Mavic Mini before DJI’s October 30th Fly As You Are Event. Here the latest images of the new drone: 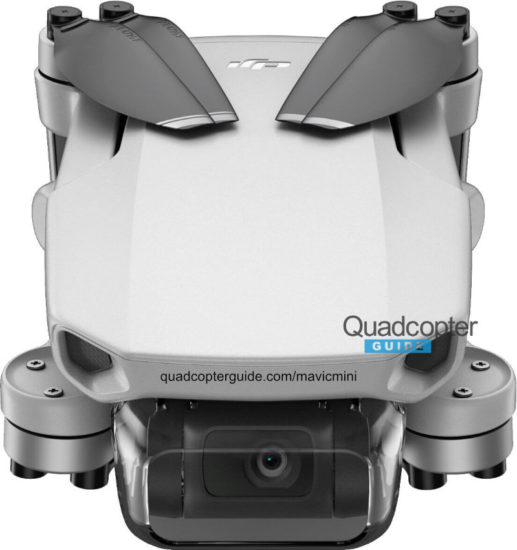 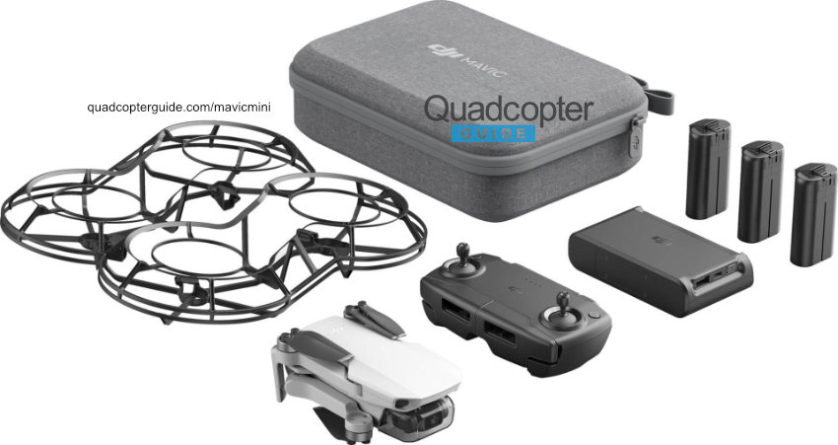 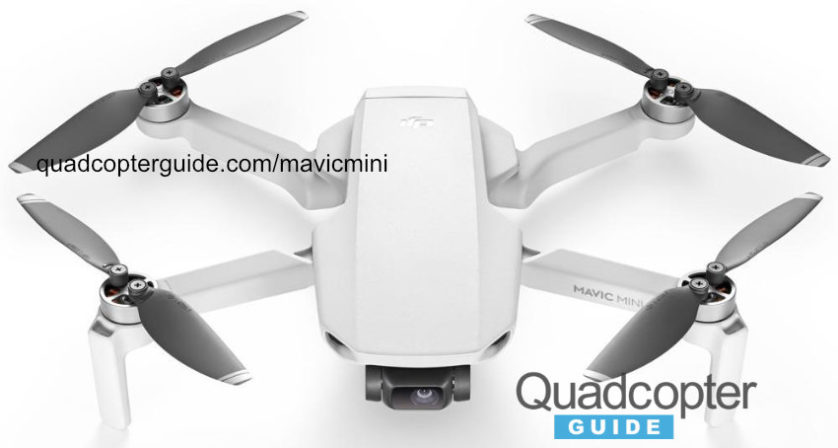 At this rate, we will know the full specs soon as well :). More leaked images of the mavic mini: 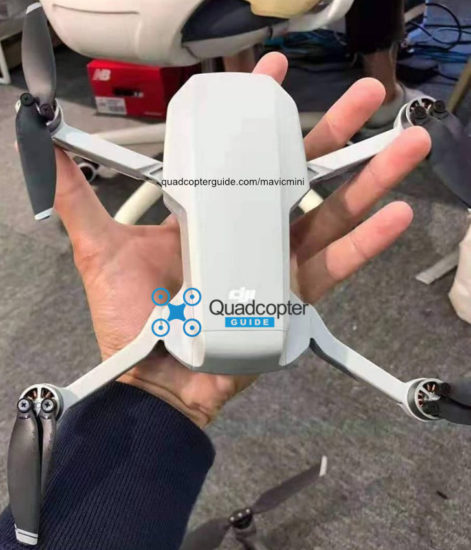 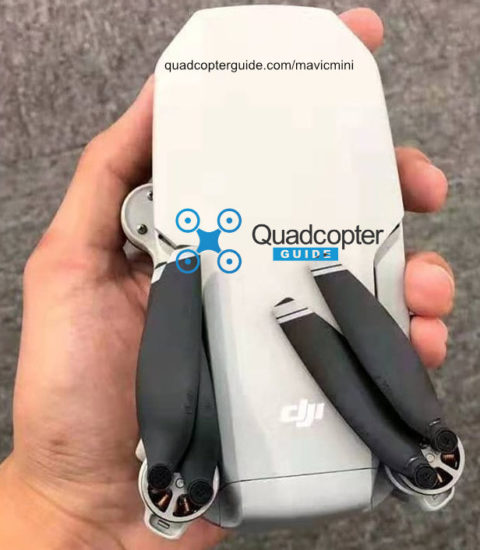 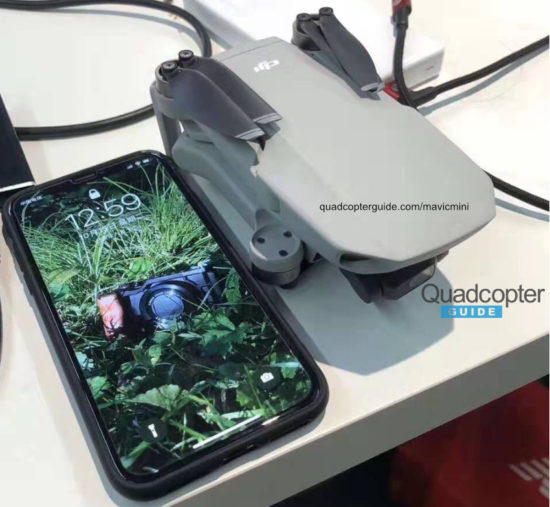 Fly as You Are is the tagline on the new page just launched by DJI. Check out the teaser page yourself here. #DJIFlyAsYouAre

Updated image below with gimbal from latest leak.

The first official mavic mini product photos have been leaked. A Chinese dealer uploaded the mavic mini images to a product listing. We don’t learn too terribly much from these images, but a few things are curious. 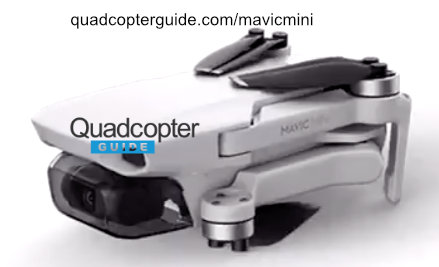 Mavic Mini folded configuration. Sure looks like a mini Mavic 2 doesn’t it?

The first image shows the new DJI drone in it’s folded configuration. Note that the propellers do indeed screw straight into the top of the motor can. Note the bottom of the rear arm, this is definitely a mavic and no longer a Spark series drone, no LED panel on the bottom of the motor. It will probably feature LED cubes as found on the outside of the arms on the bigger brother, the Mavic 2 Pro & Zoom. 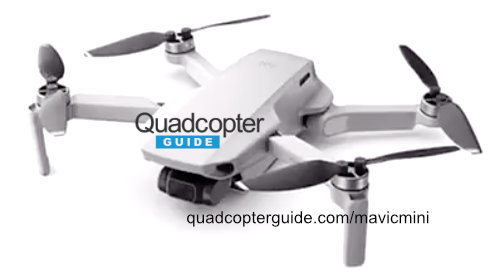 Next is an image of the new DJI Spark replacement unfolded on a flat surface/table. This is the first look we have had at the mavic mini gimbal. compare to spark mini

First, the product listing based on google translate claims this mavic mini product for 2,699 Yen = $399US is a “standalone version”. Now to me, this sounds like either this is a Mavic Mini without an RC (remote control) included. OR it is the normal “standalone” version, meaning without the Fly More Combo, which usually includes multiple batteries and a multi-charger, extra props, USB adapter, etc. It would be nice if the $399 version included the Drone and Remote Control.

A reliable source has confirmed that the mavic mini release date is October 30th. We expect the new DJI drone to arrive at a release event (#MavicMiniEvent) which will most likely be live-streamed. Stay tuned.

The Mavic Mini has been approved for sale by the FCC in the United States. Every DJI drone to date has had this approval shortly before it was released! Everything we learned about this latest development:

DJI Mavic Mini leaked - All the DETAILS! [4K]
Watch this video on YouTube.

Rumors have recently increased for a potential Spark 2 drone. While the details for such drone were essentially non-existent it is now clear that in fact, the drone is not a Spark 2, but a Mavic Mini.

The Mavic Mini is set to replace the Spark as it is very similar in size and it’s foldable legs alone make it more attractive than the Spark. With the two drones being so close in physical size it makes little sense to keep both around.

Finally, if after these leaked images you still aren’t convinced that this is a legit DJI drone that is coming soon, why is the stock status of the Spark as follows: DJI Spark stock status.

In the limited time since this leak broke, we have gathered a few of the specifications of this new DJI Drone. Some are with almost a 100% certainty, while others are mere educated guesses.

Specs which came from a very questionable source UPDATE: turns out they are wrong for sure, afterall!

Here are all the leaked images of the Mavic Mini to date. They were gathered from the international communications filings by DJI.

Let’s look at the least exciting images first. The leaked photos of the Mavic Mini show two chargers. From the voltage, they appear identical yet one is physically longer than the other. Your guess is as good as mine, why this would be. Perhaps one is meant to charge the Remote Control (which hopefully is included standard, but you know how DJI can get on lower-end drones), and the other is meant to charge the compact drone itself. 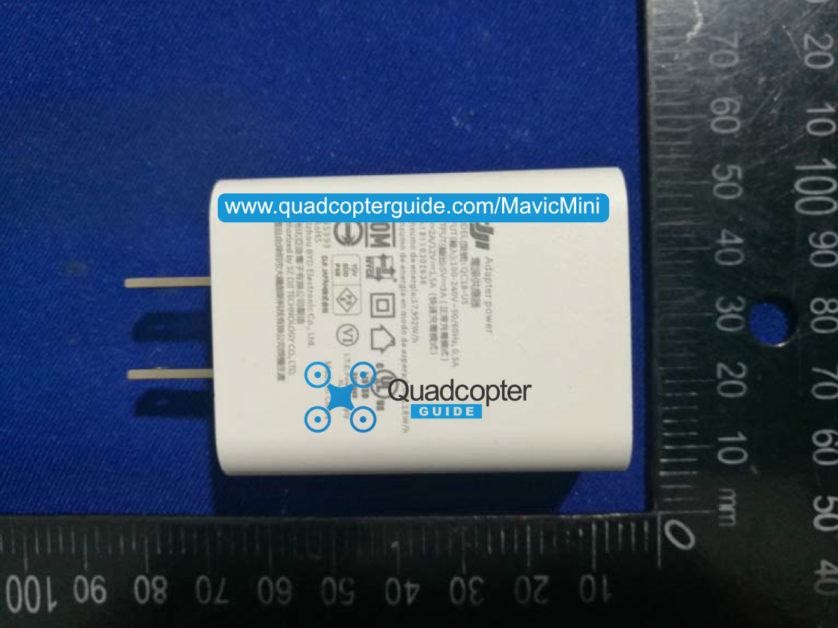 And here is the shorter charger for the drone/remote. It is just a hair shorter as seen by comparing the ruler markings of the charger 1 and 2. 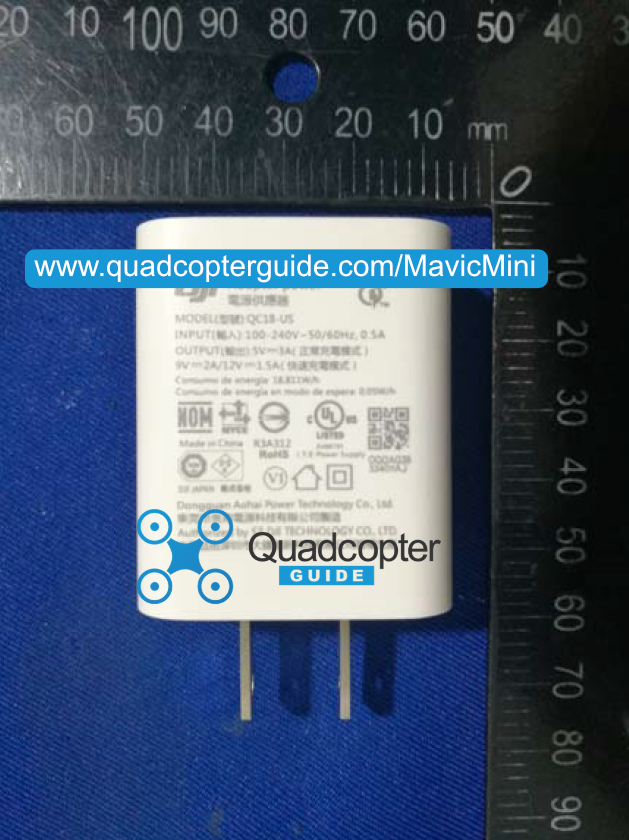 Alright, let’s get to the meat of the DJI Mavic Mini leaks. Here we have the front of the drone which shows us a few bits of the Mavic Mini. There are two places on the top of the front nose for front-facing obstacle avoidance sensors. Additionally, you can see the gimbal clamp which appears quite wide in the front. Will we see a 4K camera on this light-weight drone? It would be out of the norm if we do. We also get a first glimpse of the motors, and the propeller mounting system which in the case of this Mavic Mini uses screws instead of a plastic quick-release system. 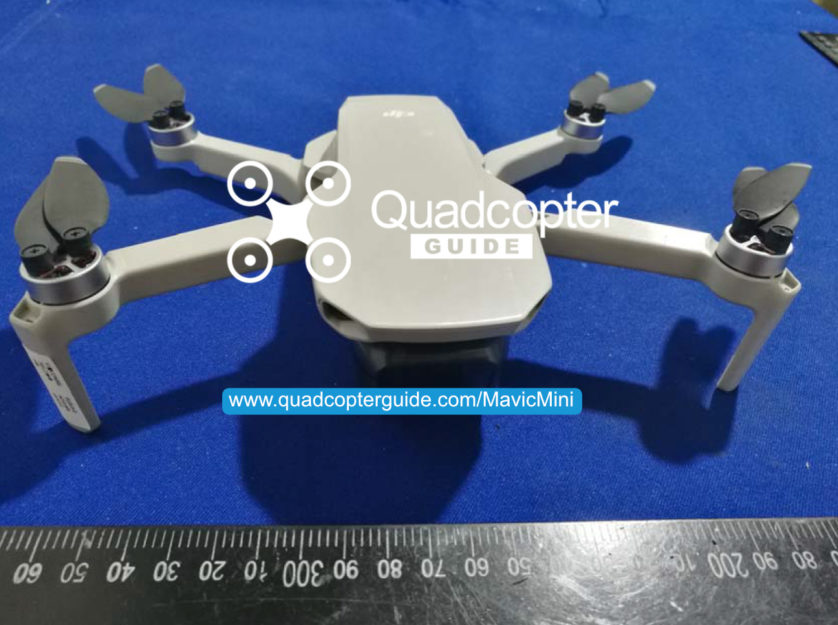 Front View of the Mavic Mini

In the following image, you see the rear of the new compact drone. Another good look at the new-to-dji propeller mounting system by using screws instead of a plastic quick-release system which is spring-loaded, as seen on the bigger brother the Mavic 2 Pro. You also see that the front legs are missing the plastic insert pieces to hide the cabling. The insert pieces on the rear arms appear to be 3d printed. It is not unusual to not have final production plastics in these early engineering samples which are then submitted for certification. 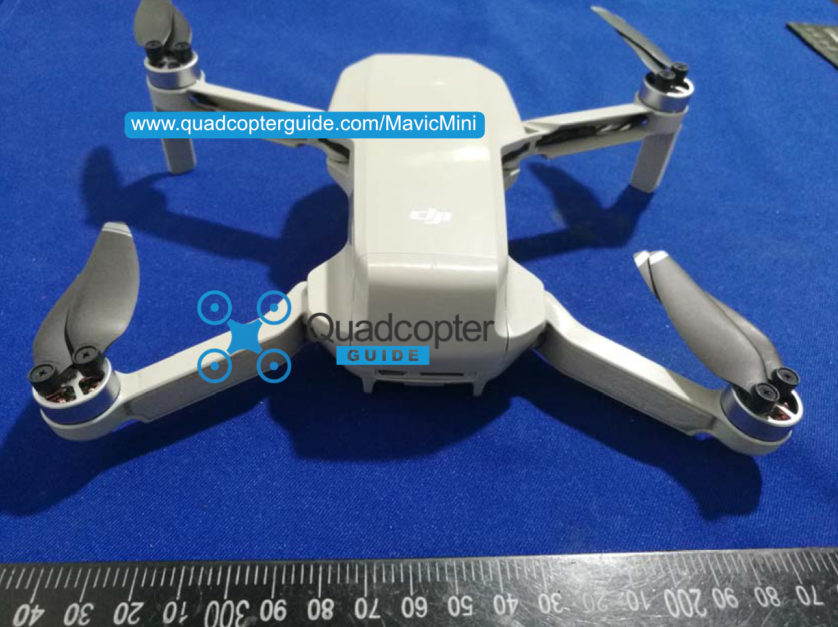 The next image gives us details of the bottom of the Mavic Mini. Clearly, we see the bottom obstacle avoidance sensors at the rear bottom end of the drone. The fold mechanism of the legs are just as they are on the larger Mavic 2 series. The gimbal clamp appears to be a single piece of plastic, no more fumbling with 2 gimbal protectors as with the original Mavic Pro. A first for the Mavic Mini drone, however, is that the power button and battery status LED’s are built into the drone itself and not the battery pack. Additionally, at the bottom, you see cooling vents as well as the new unique shape of the Mavic Mini low noise propellers. 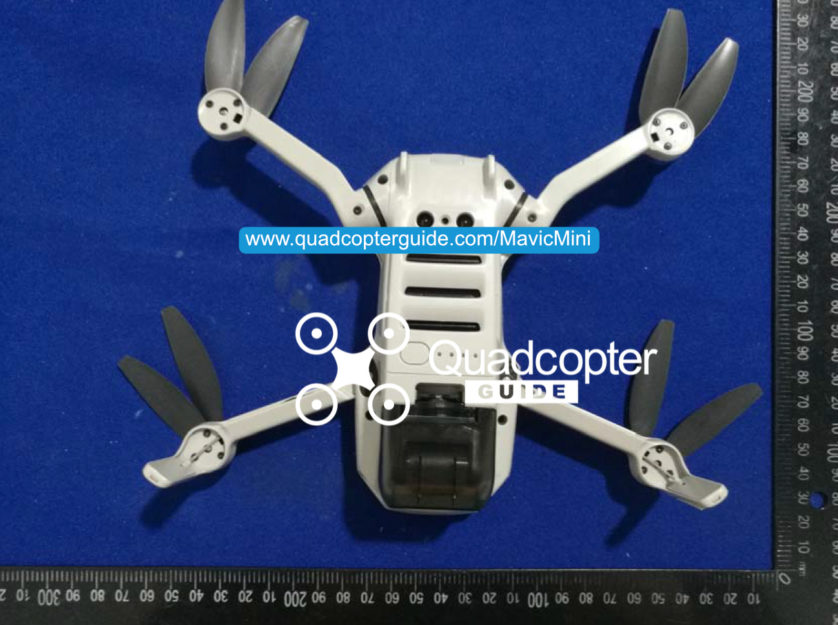 In the following photograph, you see the left side of the aircraft. It sure looks like a mini Mavic 2 doesn’t it? Additional venting at the left bottom of the drone. 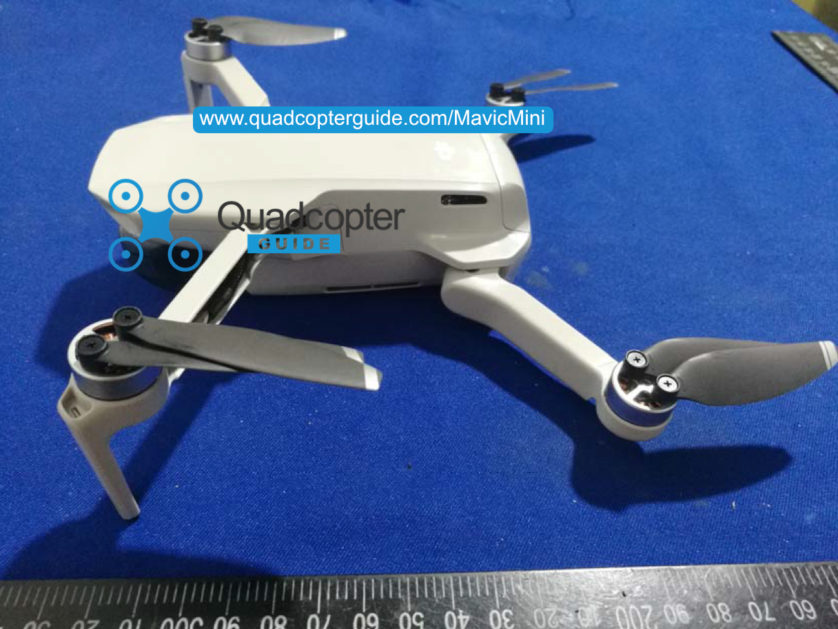 Left side of the newly leaked drone

And here we have the right side of the Mavic Mini. 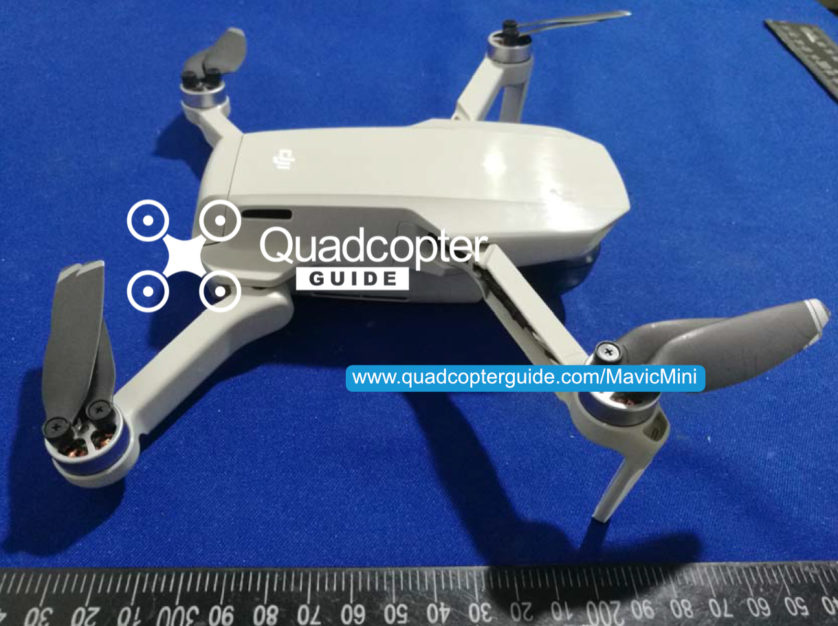 left side of mavic mini

One of the most interesting photos of the leaked Mavic Mini so far is this following image. For the first time in a DJI drone it appears that this new little brother of the Mavic 2 will have a non-square battery pack. This with the fact that the power button and power LED’s are not on the battery pack but the drone itself could mean we will get a DJI first. A drone battery made of 18650 cells. Do you think we will see this? Let us know in the comments below! 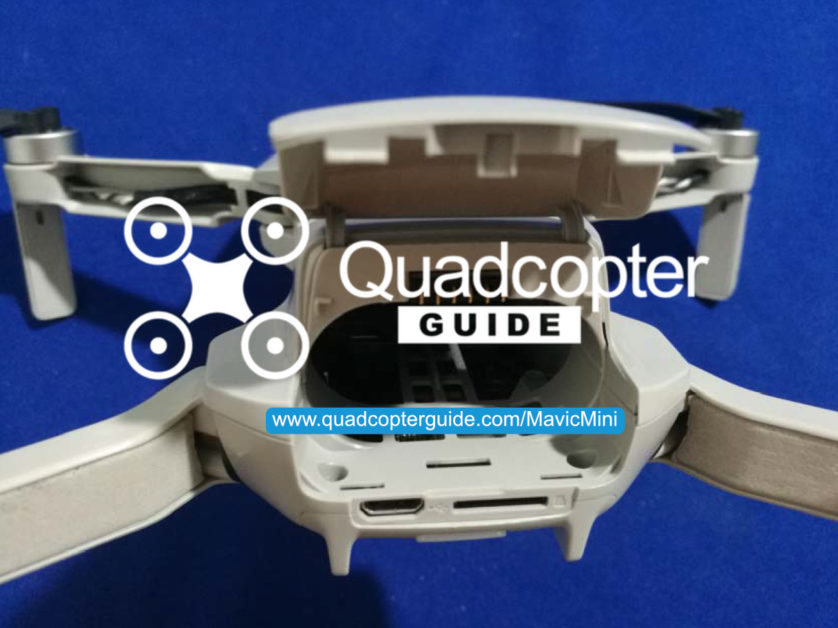 Be sure to check out our Mavic Mini 18650 Battery Analysis page.

Supposed Mavic Mini Specs have leaked and they claim that the Mavic Mini will come in at 245 grams. Unfortunately, the source of the leaked specs is questionable since the dimension they claim the drone to have do not match the official filing from DJI. So take any “leaked specs” you see with a grain of salt.

Surely many of us are interested in how much the Mavic Mini will cost. No official details or leaks are available in terms of pricing, but we expect the price to be between $349-$449. Of course, the final feature set would help narrow down the price.

We are not expecting the DJI Mavic Mini to make an appearance at the Transform your World Event on August 13th. We do expect the drone, however, to arrive before the shopping season 2019.