Everything you need to know about the just released DJI Inspire 2. DJI announced this new prosumer drone at the Los Angeles Control/Create Event on Nov 15th. Take a look at all the Inspire 2 details below.

Update: We expect it to be announced at the Nov 15th Event. See below. The rumored Release Date for the DJI Inspire 2 is November 2016. The 8th has been thrown around but we aren’t very certain about this date, as the Mavic launch has caused some manufacturing delays at DJI. We still expect the Inspire 2 announcement in November. There have been leaks about the Phantom 4 Pro as well.

The Inspire 2 has arrived! Pre-Order at the following link:

Inspire 2 features we expected before launch:

Inspire 2 features we may see:

Update 11: There appears to be two new Zenmuse Gimbals coming:

We have received word of a Zenmuse X4S and a Zenmuse X5S coming at tomorrow’s event. The X4S may even be a 1″ Sensor. We will find out soon enough why this would be called the X4S and not the X6S.

(DJI Inspire 2 Teaser Video by DJI. Click above to view the Teaser)

The Video shows a few interesting tidbits besides the amazing Hollywood grade aerial footage. On the Screengrabs below you can get your first “official” peak (see leaked image below in Update 7) of the Inspire 2. First up is a first look at the active Obstacle Avoidance sensors. Similar to the Phantom 4 and Mavic Pro, the Inspire 2 will receive these two forward facing sensors. They are mounted on a special support board that extends from each side of the Inspire 2’s nose.

Here is another look at the original leaked image, you can see the Obstacle Sensing Sensors: 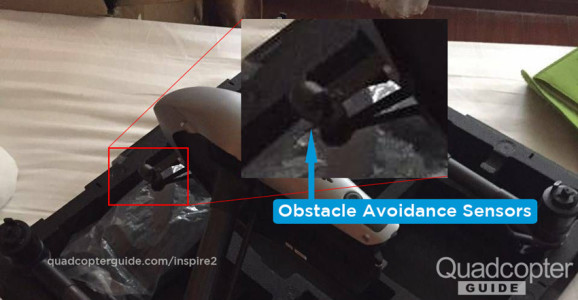 Finally, we found this last image sneaked into the teaser video. It appears to either be the base of the Obstacle Avoidance Sensors, meaning the sensors could fold up 90 degrees so they aren’t hanging out towards the front during transport, or the base of the motors. 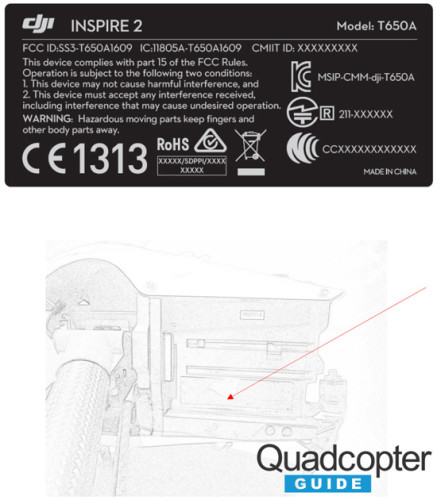 If we compare the Dimensions listed on the FCC Part 15.247 Test Reports you can see that the Inspire 2 will be very similar in size to the Inspire 1:

There are rumors of the Inspire 2 being able to accept two TB50 batteries at once. We aren’t sure why DJI would go this route unless you could optionally fly with one battery as well. The weight difference from one to two batteries at a time would pose an interesting challenge. We would be surprised if this were actually a feature of the Inspire 2. Currently we don’t buy it.

Update 8: DJI sends out invitations for a November 15th Event.

DJI has begun sending out invitations for their “Control/Create” Event which will take place in Los Angeles on November 15th 2016. 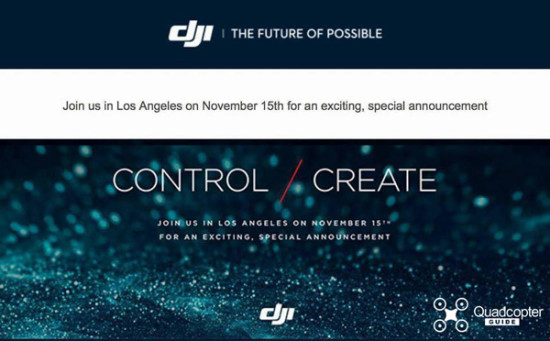 The first images of the DJI Inspire 2 have been leaked. The photo shows an Inspire 2 sitting in its foam tray used inside the Inspire shipment cases. 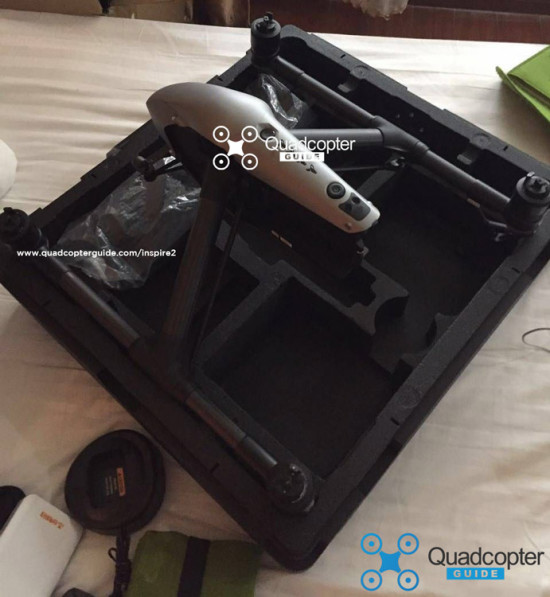 The recent FCC documentation confirms the arrival of an Inspire 2. Page 9 of the FCC Test Report clearly mentions the use of an “Inspire 2 Charger/Charging Hub” on its Support Equipment List used to charge the new Inspire 2 Remote Control. 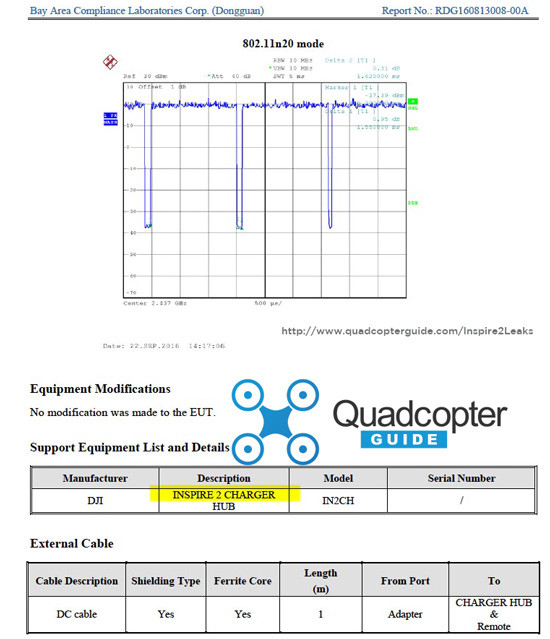 Just a few days ago on Oct. 6th, DJI filed for an FCC ID Application for a new Remote Control with the FCC ID GL6D10A. Since the Inspire 1 FCC ID is GL658 we are fairly certain this will be the remote control for the much anticipated DJI Inspire 2. An FCC ID is a required piece of identification required for all hardware devices being sold in the United States. Each unique identifier assigned to a device has to be registered with the United States Federal Communications Commission. Before the product can be sold, the manufacturer has to have the device evaluated by an independent lab to ensure it conforms to FCC standards.

Further details on the GL6D10A Remote Control state that it has an input voltage of DC7.4V from its lithium battery, same as the Inspire 1 RC. 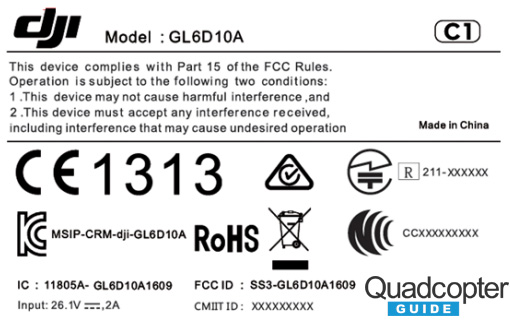 The FCC sticker on the Inspire 2 Remote Control 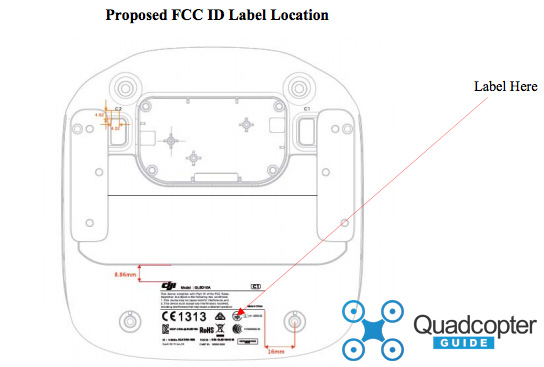 Location of the FCC sticker on the Inspire 2 Remote Control

If we compare the FCC ID label images from the Inspire 2 to the Inspire 1 we can see that the remote control is practically identical from the bottom.

UPDATE 4: Is this a CAD drawing of the DJI Inspire 2? 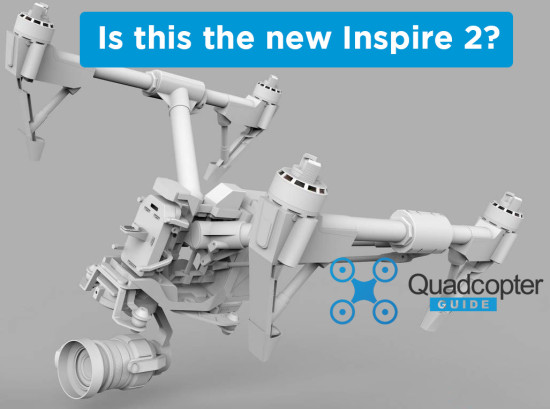 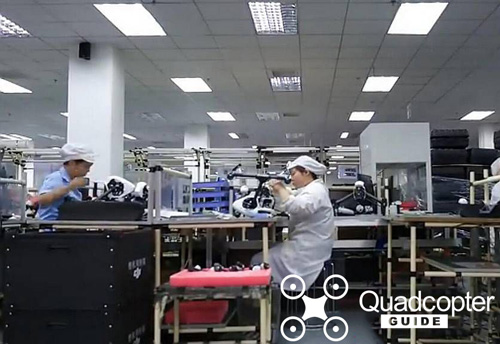 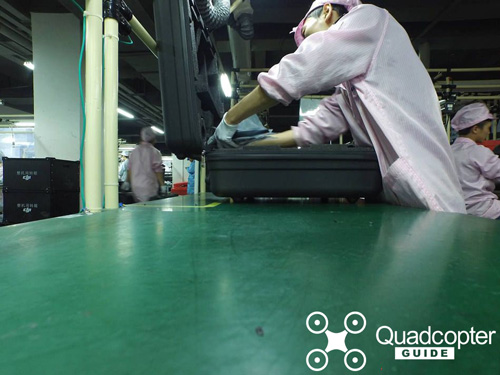 With the release of the Z3 camera we are certain that this will be the camera shipping with the normal DJI Inspire 2. Of course, there will be an Inspire 2 Pro with the X5 camera. The following Specs are rumored to be included in the Inspire 2:

UPDATE 3: DJI just launched the Zenmuse Z3 Gimbal and Camera. The first camera with optical zoom capabilities. It seems pretty clear that this technology will also be featured on the upcoming Inspire 2. Currently, the camera offers a 3.5x optical zoom and 2x digital zoom utilizing a similar sensor to the X3 camera. It can be mounted on; the Inspire 1 series, Inspire 1 v2.0, Matrice 100 and Matrice 600. 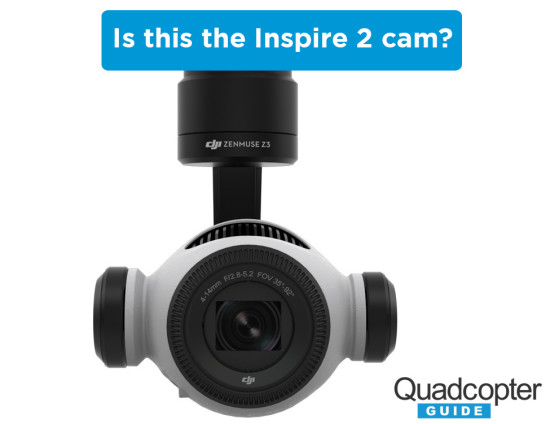 UPDATE 2: A Declaration of Conformity for the DJI Inspire 2 has been leaked. The Declaration of Conformity is a special document which DJI signs to state that the product meets all of the requirements applicable to such class of product. You may recall seeing the letters CE on FCC Stickers on electrical products. CE stands for “Conformité Européenne” which means European Conformity. All products being sold in Europe which are not manufactured in Europe have to have this certification. For us, it means that the process of releasing the DJI Inspire 2 is under way, and we will see other Leaks soon. Subscribe to not miss out on any news! You can do this by clicking the Link or scrolling to the end of this article and filling out the form. 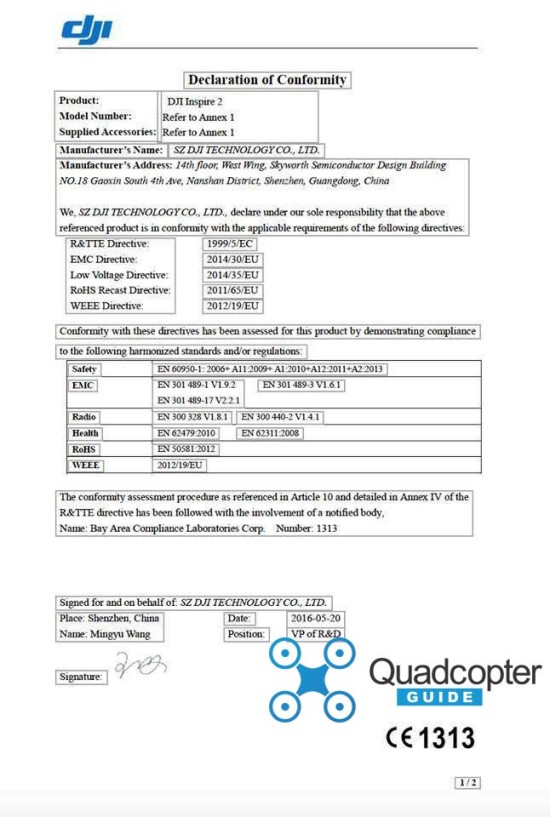 The Inspire 2 Release is arriving in the coming months and we will provide you with the latest leaks and our analysis of everything we have found on the upcoming release of the DJI Inspire 2. We are the leading rumors site for DJI Quadcopters such as the Inspire 1, Phantom 4, Phantom 3 or even products such as the DJI Osmo and the newly released Osmo+. The Inspire 1 was released November 13th, 2014 pointing to a Release Date of the DJI Inspire 2 within the next weeks/months.

The basic structure of the Inspire 2 won’t change too much, the carbon fiber arms with it’s patented raising landing gear, ensures a full 360 degree shot is possible without getting the landing gear in the frame.

The Inspire Series has become the go-to drone for prosumers and professionals alike.  The ability to move the camera independantly of the drone body is hugely important for professional video footage. With the X5 camera release the Inspire Series becameSome of the top features we are hoping to see included: