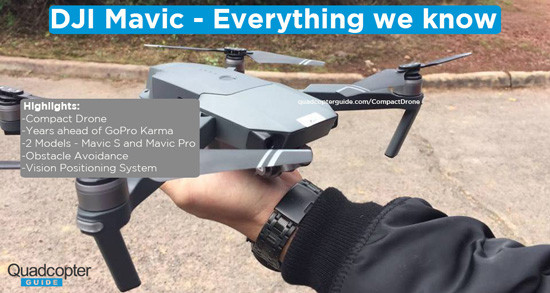 BREAKING: DJI is releasing the DJI Mavic TODAY (Sept. 27th). See all the details and updates to the Leaks on this page. 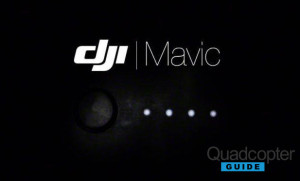 The DJI Mavic is here! Check it out Now! 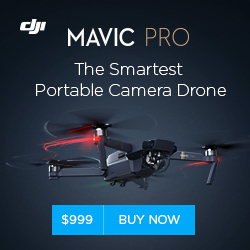 The Mavic has just been released! It features a new DJI technology called OcuSync, which appears to be the successor to Lightbridge. OcuSync claims up to 7km (4.3mi) range at 720P and 1080P streaming in closer range. It even allows transfer of videos and images taken at up to 40Mb/s while the Mavic is in the air!

*DJI Mavic Release* – The Announcement Event Live Stream for the DJI Mavic Release – Adventure at your Fingertips Event will be available here. Check back Sept. 27th at 11:30 EDT New York time or subscribe to our list to be notified.

UPDATE 9: The DJI Mavic will be released in two Versions at launch. They will be the DJI Mavic S and the high-end DJI Mavic Pro. Pricing for the high end is rumored to be around $1299.

From the release of the FCC ID sticker locations and the stickers themselves we know that there will be two versions of the DJI Mavic coming on September 27th at the live event detailed above. This goes along with earlier rumors that there will be a lower end version utilizing an ofdm (wifi) based link. This should be similar to the remote control system used in the Phantom 3 4K. The Mavic Pro will feature full-range Lightbridge as we know it on the Phantom 4. There may be further limitations to the Mavic S such as Camera Resolution, but the main thing currently is pointing to the technology used in the remote control. Speaking of remote controls, we also get a sneak peak of the bottom of the Mavic remote control, see the third FCC image below. 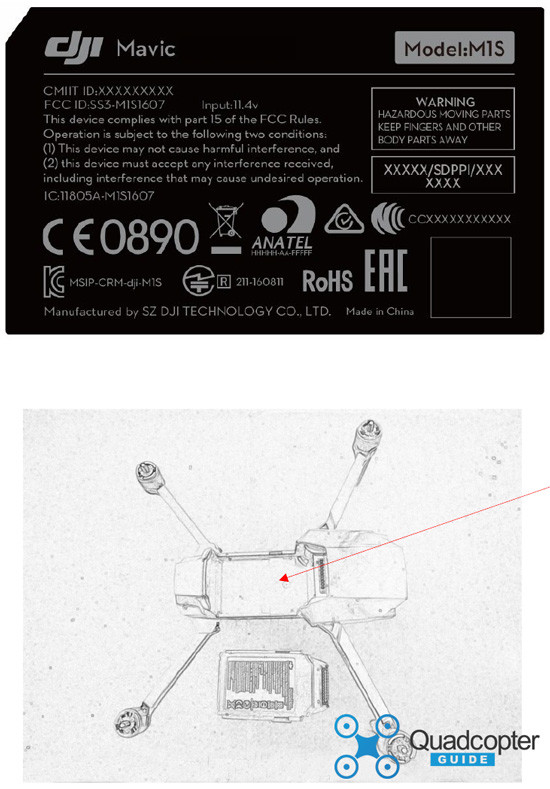 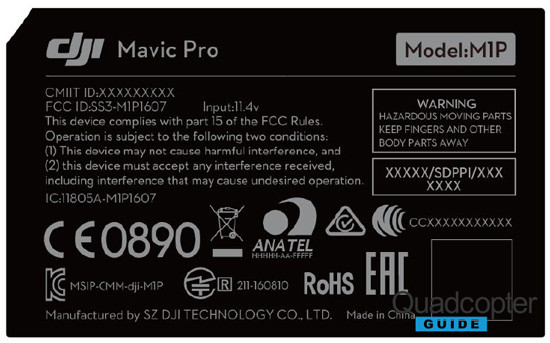 Thanks to an anonymous source we received screenshots of a yet to be released DJI App which has placeholders for 2 different Mavic drones. Just like the Phantom 4 was codenamed Tomato the Mavic is codenamed Maverick. Hence why the screenshots show Maverick. Interestingly, there appears to be a new DJI GO PAD app mentioned. This may be a version of the Mavic with built-in display, however the leaked images do now support a built-in display for an app like this. The second image also supports the rumors of multiple version of the Mavic coming on Sept. 27th. The base model will have a wifi based remote control limiting it’s range, and at least one other “high-end” model which will feature Lightbridge and have a 5km range. There are 3 rumored version of the Mavic. 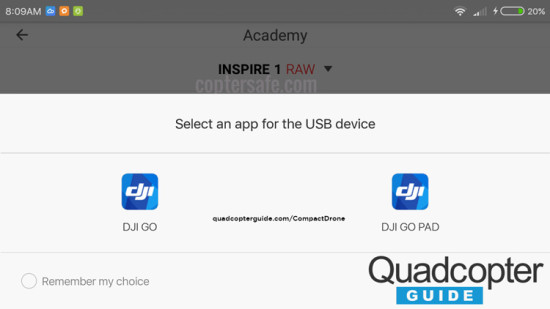 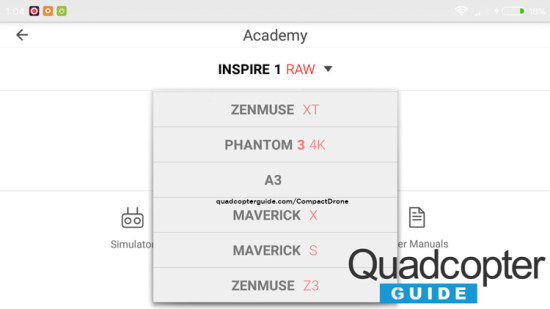 It seems that during the final testing of the DJI Mavic more photos were taken :). Here you can see the side view of the remote control. Note the white USB cable hanging down. This points to the ability to attach a mobile device as we’ve been accustomed to with the other DJI drones. Earlier rumors pointed towards an integrated Display, we now believe that the integrated display will only show basic data as in the leaked image of the remote control below. The video feed will most likely come from you own mobile device utilizing the DJI Go App. 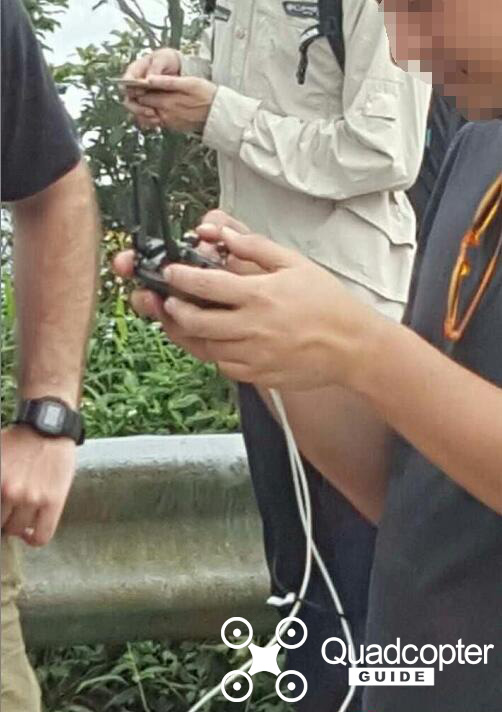 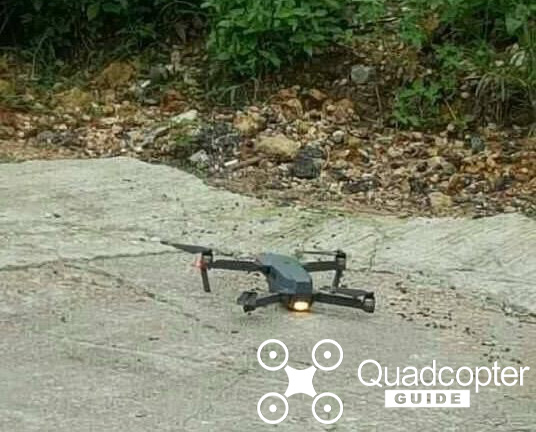 The DJI Mavic on the ground with it’s arms locked in the flying position.

In a recent video online the first hints of the DJI Mavic case have surfaced. This may be a pre-production review or test version of the Mavic, so this may not be the final case that it comes in. 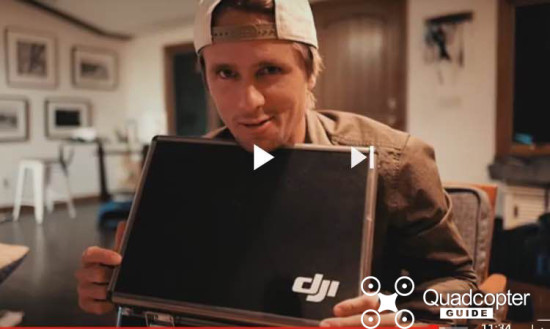 The first photos have leaked showcasing the DJI Mavic. Below for the first time you can see the Mavic’s foldable arms, propellers and stereoscopic sensors. Interestingly, there isn’t a clear bubble over the camera, which was found in the earlier leaks. It may be removable, as there appears to be a spot for such an enclosure in the second photograph. In the third photo you can see a glimpse of the remote control for the Mavic. The bottom of the remote control appears to fold out itself as well, perhaps to allow a mobile device to be attached as is the case with all other DJI drones. Finally a comparison between the DJI Mavic and Inspire 1 is visible in the last photo. The Mavic in it’s folded configuration is one compact drone! 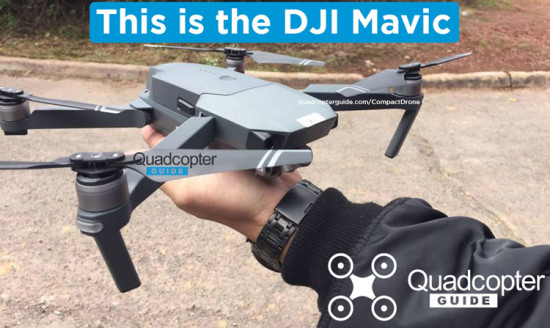 DJI Mavic as seen from the front 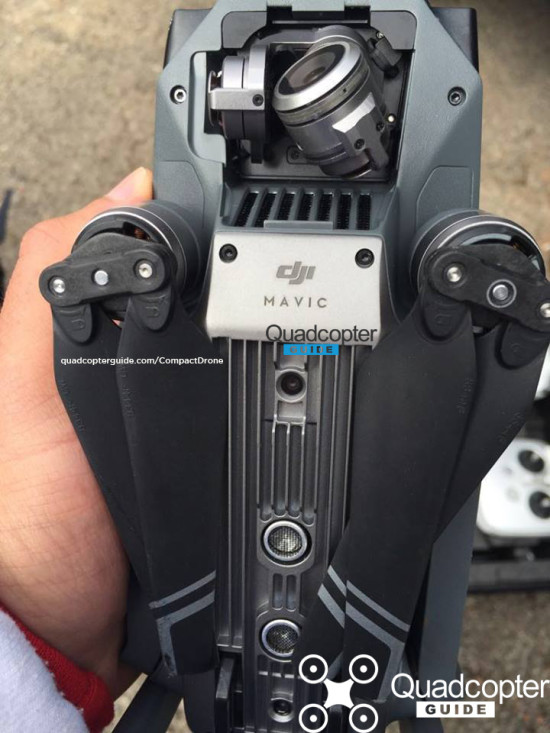 The bottom of the DJI Mavic 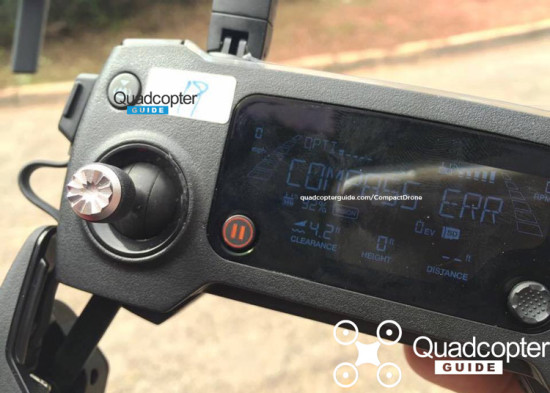 The remote control of the DJI Mavic 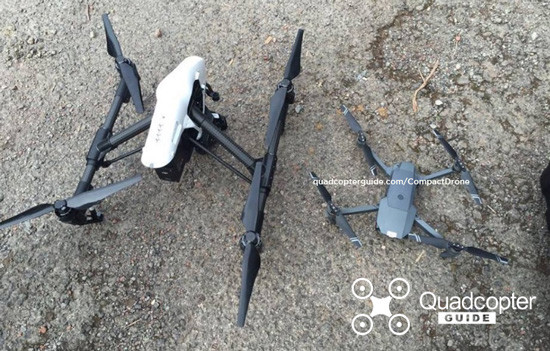 Here the DJI Mavic sits next to the Inspire 1

UPDATE 5: DJI just posted a teaser video showcasing footage taken with the DJI Mavic. You also get a glimpse of a few angles of the new drone as leaked below.

The Teaser Video can be viewed here: 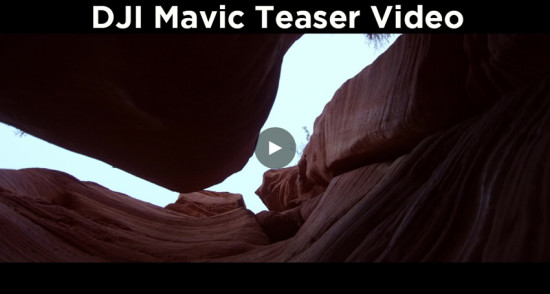 The Announcement for the “Adventure at your Fingertips Event” will be streamed live at 11:30am EDT on September 27th in New York.

UPDATE 4: Further images of the DJI Mavic have been leaked:

These images give us an additional glimpse at a few features of the new DJI Mavic. At the front of the Drone, you can see stereoscopic sensors very similar to the ones featured on the Phantom 4. Leading to the conclusion that the DJI Mavic will also have the Obstacle Avoidance System on board. The sensors in combination with  “advanced computer vision and processing” will give the Mavic active Obstacle Avoidance which allows it to react to and avoid obstacles in its path. 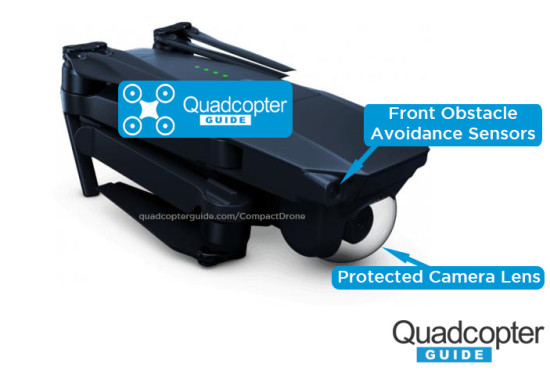 UPDATE 3: The DJI Mavic is coming September 27th! Members of the Press have received invitations from DJI for a special Event titled “Adventure at Your Fingertips”. They are asked to RSVP for an event held on September 27th. 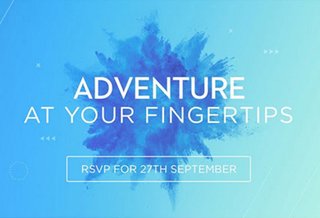 UPDATE 2: The new DJI drone will be called the DJI Mavic. Read all relevant Info below:

DJI filed a trademark for the name Mavic on August 15th, so it makes sense that this new compact/racing drone will be called the DJI Mavic. Each time DJI files a trademark for their products which are quadcopters they spam the identification of the trademark application full of text related to UAV’s. This makes it more difficult to figure out what actually the new not-yet-released product will do. In this case, the following items were interesting to us:

electro-dynamic apparatus for the remote control of signals; …; audio-receivers and video-receivers;

Now the above set is already a reduced list from the original document. As you can see there are tons of items listed and if you filter through the noise the bolded items above stick out as the most interesting in terms of this new drone. The laser speed detectors sound a little too sci-fi, but perhaps in a few years. The electronic device for video display could put more weight behind the rumors of the transmitter featuring a built-in display. Goggles for virtual reality could mean Goggles for FPV flight.

UPDATE 2a: DJI opened it’s own Indoor Drone Arena. Could the DJI Mavic be part of this new Market Strategy?

DJI opened their “DJI Arena” in Yongin City, South Korea last month. They currently run training programs with the Phantom 4 there. You can also bring your own drone and reserve the arena for exclusive use. We wonder if the course is too tight for basic FPV flying. More details about the DJI Arena here.

UPDATE: Thanks to an anonymous source we have further leaked information on DJI’s next drone.

The latest drone from DJI will feature a folding design, allowing the arms and rotors to fold into the quadcopters body for compact storage and transport. 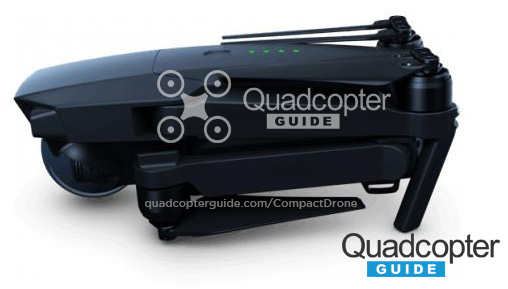 This new transformable drone allows the front arms of the quad to fold forward from the rear of the body. They will lock in place on the side of the protected camera housing. The arms stored near the front of the drone body will fold back to the rear downwards. This allows the propellers to be on top of the motors once the arms are fully locked in place. 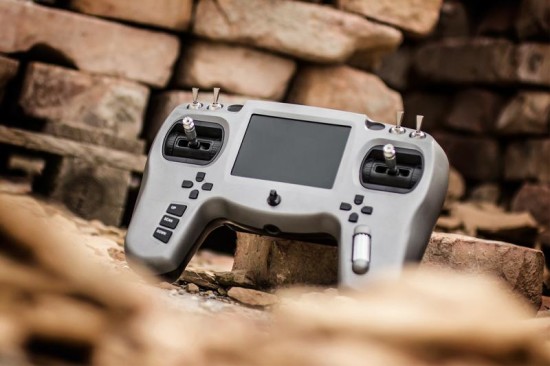 
There could be various motivation from DJI to place an LCD screen in the transmitter itself. First for a true compact drone you don’t want to mess with a mobile device holder for space reasons. If the DJI Mavic turns out to head into the realm of FPV racing the separate phone connection via USB may just increase the latency too much for precise maneuvering of the drone.

As previously leaked the battery can be seen here: 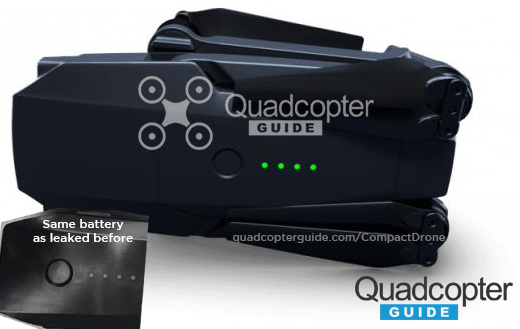 Rumored release date for this DJI compact drone is September 15th. Gopro finally announced that their Karma will be unveiled on Sept. 19th. We still can’t believe they mean 2016 ;). It makes sense for DJI to try and strike before with this new DJI Mavic.

DJI’s next drone will be a bit smaller. Based on the following battery leaked just recently, we know it will be based on a 3S 3830mAh LiPo battery. It will most likely be a compact drone capable used for aerial photos, or a bit larger than normal FPV Racing Drone. Either way, we are excited to find out what it is. Stay tuned. 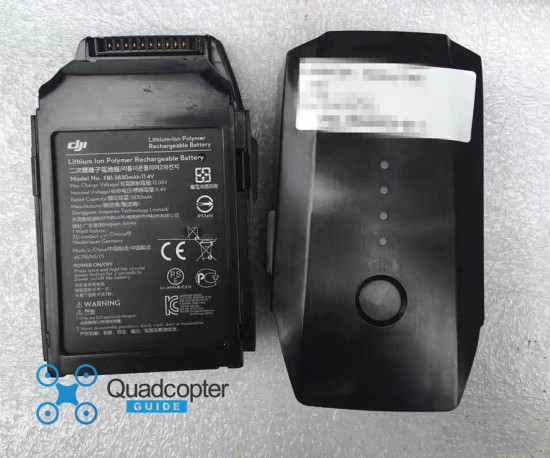