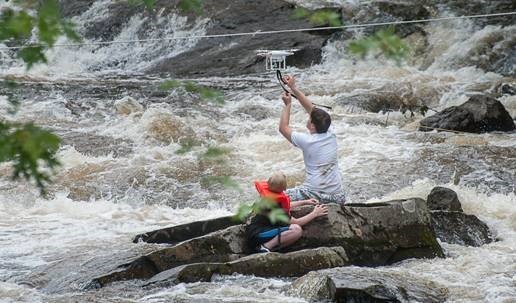 Tuesday afternoon the Auburn, Maine fire department responded to a call that two boys were stranded on a rock in the Little Androscoggin River in Mechanic Falls. The boys’ tube had overturned in the rushing waters.

Fire chief Frank Roma’s crew was brought in because of its experience in swift water rescues. But Tuesday afternoon they added a new strategy to their operation, using a drone to help deliver a life vest to one of the stranded boys.

Roma has used his own DJI Phantom 3 Professional a few times to document his department’s training operations. Generally, he uses it as a hobbyist to shoot videos in Maine. But on Tuesday, with the device in his truck and an awareness of how emergency responders have used drones to aid their efforts, Roma decided to see how it could help save the stranded boys.

“I’ve seen there’s greater potential way beyond just taking pictures,” Roma said. “There’s using them for looking for lost children, search and rescue, hazardous materials incidents and documenting arson investigations in large buildings that might not be safe for individuals to enter.”

Roma initially planned to scout out conditions down the river, to see what might await the boys if they were swept away. But when he saw one of the boys didn’t have a life jacket, his priorities changed.

Roma attached a nylon water rescue line with Velcro to the bottom of his drone. Then, amid the deafening sound of the rushing water, he used hand signals to explain to the boy what would happen next.

Roma then flew the drone out and had it hover above the boy, who unattached the line. With it in hand, the boy tugged on it to pull the life vest to him. Roma had never practiced this before, but it worked.

“I’ve flown it long enough that I was comfortable in doing what we had to do given the situation,” Roma said. ‘“He followed along and played his part perfectly.” 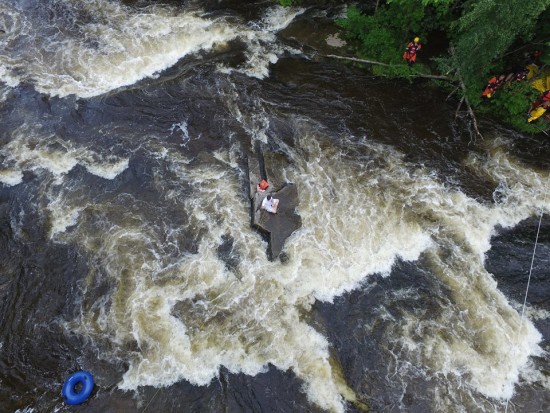 Once the boys both had life vests on, the team used a raft to recover the boys from the rock.

Roma plans to keep using his own drone when opportunities arise, but said with a tight budget it might be tough to justify purchasing other drones for the department. 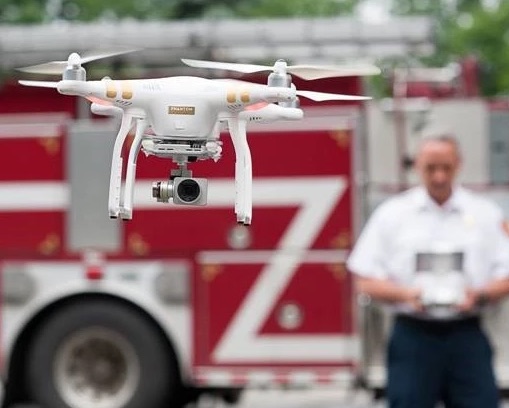 “It’s nice to be able to have an opportunity to take a technology we are just on the cusp of in terms of really being able to fully utilize to its maximum effect, and be able to suggest it’s something that people might want to consider,” said Roma, who said he’s received calls from interested emergency responders around the country.