DJI is holding another event this month. Is this the Phantom 5 release we have been waiting for, or is it something else? DJI has sent out invites for a DJI Osmo Pocket – Because Life is Big Event which will take place at the Good Morning America Studios in New York. The event is scheduled for 2 PM EST.

We will detail what the Invite hints towards and what we expect to see based on recent DJI Rumors & Leaks.

Osmo Pocket is available for order!

The Nov 28th Because Life is Big Event is around the corner. Check out the latest leaks on the Osmo Pocket:

The Osmo Pocket will also feature the following:

Update 5: The First leak of some of the accessories of the Osmo Pocket

The Osmo Pocket accessories have made their first appearance in the following leaked image. 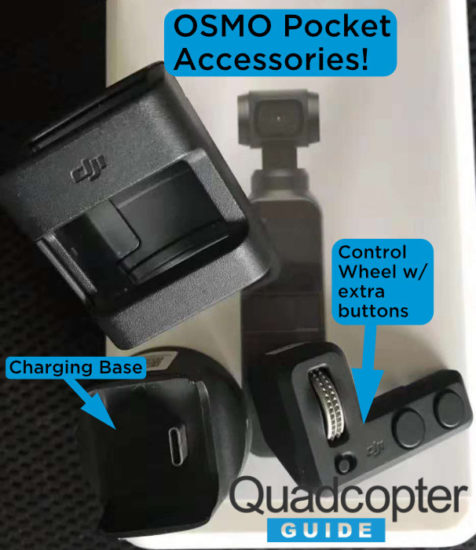 The following images of the retail packaging of the Osmo Pocket have been leaked. In the photographs, we get a first glimpse of the final retail version of the device. On the front packaging, we see the previously leaked Osmo Pocket gimbal with the control handle. Interestingly there appears to be a plastic slider which will reveal a connection port for accessories. The second photo shows multiple Osmo Pockets, most likely from a retail store getting ready to sell the device right after launch.

The Osmo Pocket features an 875mAh battery (7.7v) most likely a 2-cell LiPo. There will be a new App to use with the Osmo Pocket, called the DJI MIMO APP. The App will be available for both iOS and Android devices on the App & Google Play stores. Another interesting tidbit is that on the rear of the packaging you see the made for iPhone blurb towards the bottom. The text mentions the iPhone X but not the Xs,Xs Max or XR, meaning the device has most likely been in a production ramp up for a while now. We don’t expect many shipping delays for this release. 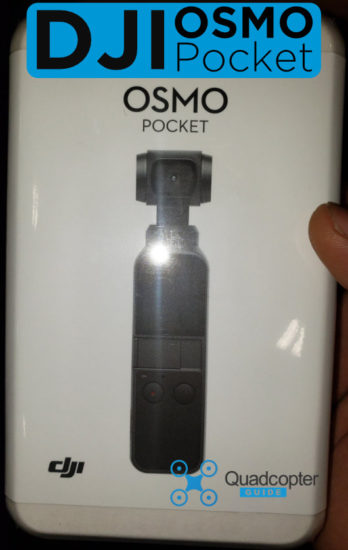 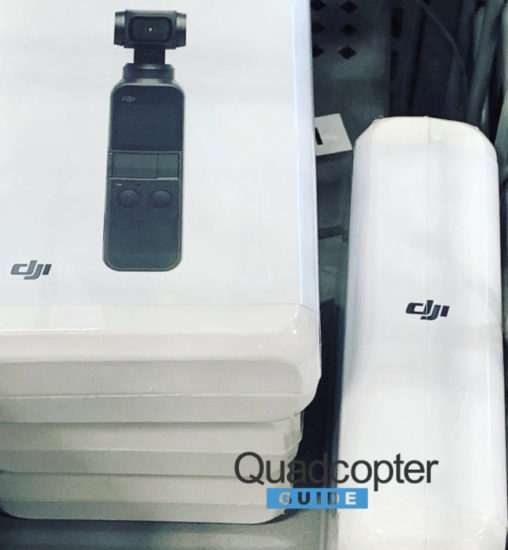 (First look at the retail version of the device. Plastic Slider in the middle) 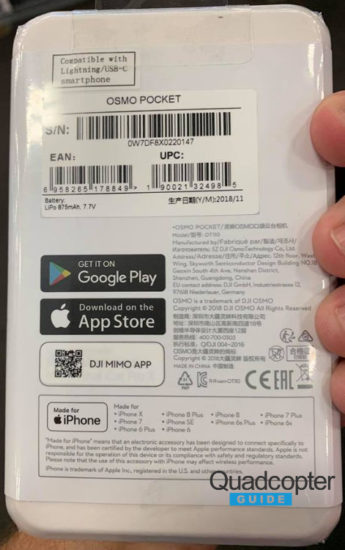 (Rear of packaging, in this case, a Lightning/USB-C compatible version. We expect others as well (micro-USB))

Update 2: Official Trailer Video and Landing Page is up!

Check out the trailer and special Landing Page for the Nov. 28th Event: 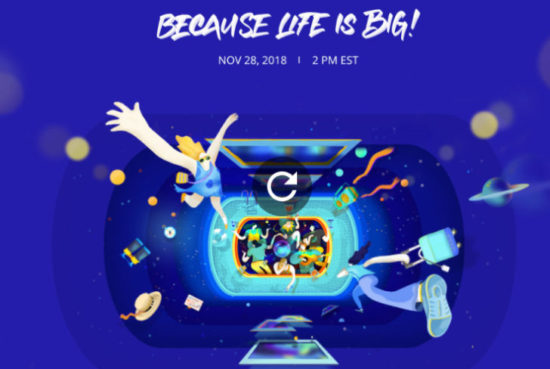 In the trailer, we get a look at what the app will look like for the Osmo Pocket. We now know it will be the DJI MIMO App: 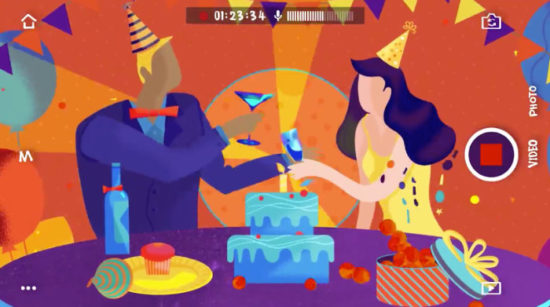 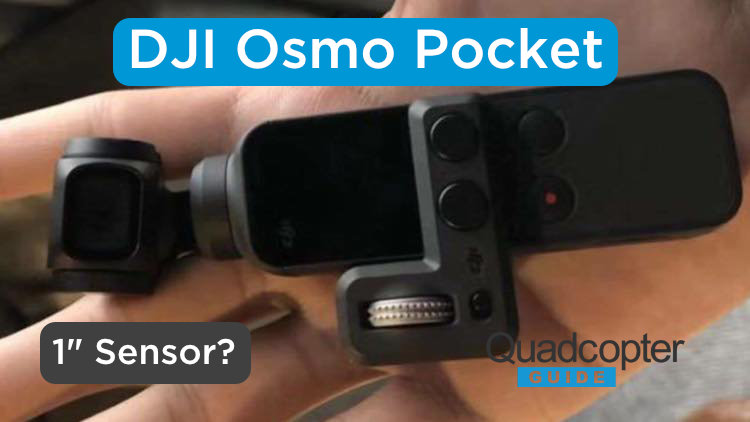 Well there you have it folks. The product we will for sure see on Nov. 28th, the DJI Osmo Pocket. From this latest leaked photograph we get a closer look at the gimbal & camera. Sure enough that camera looks mighty similar to the camera on the Mavic 2 Pro. Will it feature the same 1″ Sensor?

This image shows a different design or maybe a different attachment, as we don’t have the lightning cable adapter but 2 additional buttons along with a dial and a small switch. 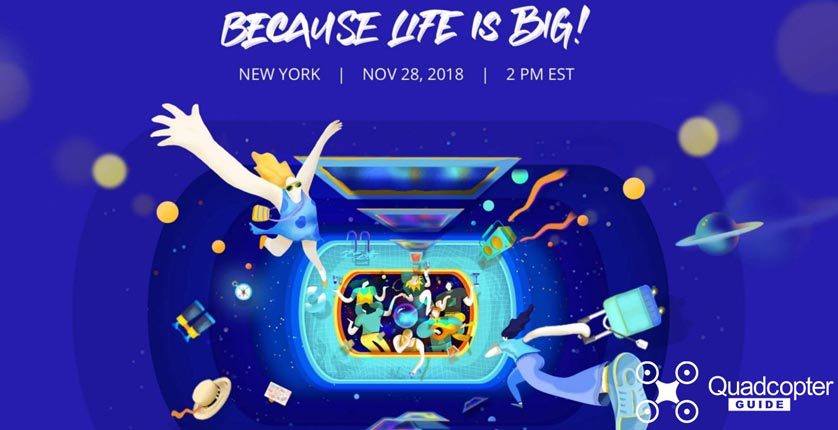 Because Life is Big Event Invite

The Invite image is usually a good indicator for clues as to what one can expect from the event. This time around the image features a cartoon-style pool in the center. The pools shape however closely resembles the shape of the Mavic 2 Pro’s Hasselblad camera.

In addition to the pool in the center, there is a travel & party theme to the Invite. People with suitcases, as well as a compass, speaker, drinks, and binoculars, can be found as well. There are frames coming out of the top center of the pool, which could resemble a camera sensor, traditional film frames or even just framed images.

The email received by Invitees talks about the location of the event which will be held at the Good Morning America Studios. The Event is scheduled to take 2 hours from 2 pm to 4 pm on Nov. 28th (Check the event’s time in your local time zone here)

No Phantom 5 OR is it coming after all?

Of course, we secretly are hoping for the Phantom 5, but the invite makes us feel we’re getting a previously leaked compact Osmo (Osmo Pocket, more Proof below), a Spark 2 or perhaps even a new Osmo featuring the Mavic 2 Pros Hasselblad L1D-20c Camera with 1″ Sensor. We would expect DJI to make the invitation less playful if the Phantom 5 was really coming. In which case DJI may feature a slight glimpse of some sexy curves of the new drone if it was for a higher-end drone as we have seen for the Mavic 2 Pro Release. 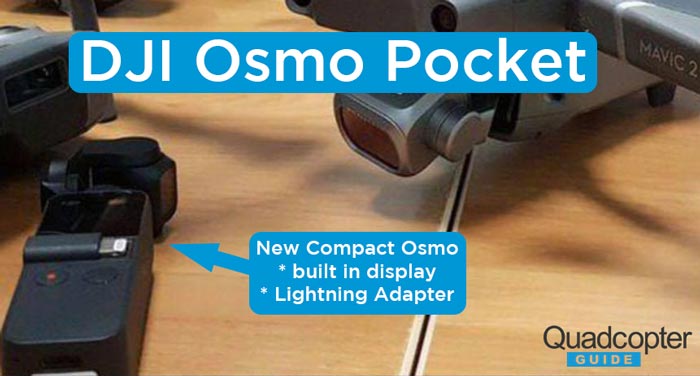 We know it will communicate via 5.8GHz Wifi and Bluetooth BLE v3.0.

Perusing through the FCC filing made us aware of the DJI Osmo Pocket. Included in the filings are devices used in addition to the product-under-test. This is the case when an accessory for the main product is being tested. Of course, it makes sense to test the accessory with the main device to measure signal and radiation strength, which is a large part of any FCC filing. The additional devices used for testing are listed in the “Support Equipment List and Details” section of an FCC filing. Look at what we found in this section for the Osmo Pocket Wireless Module:

This as much as officially confirms we will see an Osmo Pocket (OT110) soon. 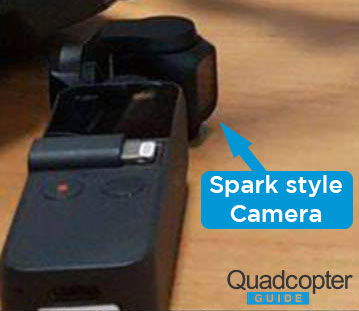 If you look at a recently leaked image which first appeared when the Mavic 2 Pro was rumored, you can see a compact camera with gimbal laying on the table. If we take a closer look at this rumored Osmo Pocket you notice a few things:

If you would like to keep up with the latest DJI Rumors such as the much-anticipated Phantom 5, be sure to subscribe to our YouTube Channel or Email List. Email Subscribers receive free drone resources, guides and are first to be informed of pending DJI Releases and Leaks!